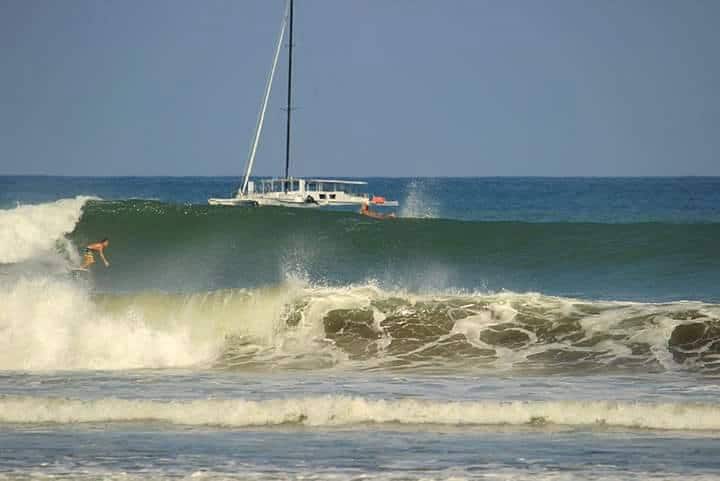 This week Costa Rica experienced a huge ocean swell that was created in Artantica.

A massive storm pushed giant waves that crashed into all the eastern Pacific beaches from Chile to California. Some of the hardest hit in Costa Rica were Pavones to the south and on the other side of the bay Playa Matapalo and Lapa Ríos Eco-Lodge,Osa Peninsula. Around the point of the Corcovado National Park waves peeled past Caño Island all the way into Drakes Bay, one of the famous pirates Sir Frances Drake’s favorite hide outs. Two neat Eco-lodges are located there, Drakes Bay Wilderness and Aguila de Osa Jungle Resort.

The waves shifted sand bars and washed away several houses and business located right on the beach  from Dominical all the way up the coast to Manuel Antonio National Park. Hotels Parador, Si Como No and  La Mariposa had some great views of the waves smashing into the small islands just off the beach.

Planet Dolphin cancelled saturday, sunday and monday’s trips because of dangerous wave conditions , waves wire breaking over the jetty at the Marina Pez Vela located in Quepos. The large waves continued on North hitting Los Sueños Resort and Marina next to the Hotel Marriot.

Big thanks go out to Manuel Antonio life guards , Costa Rican coast guard, fire and rescue department and the local Quepos Police for keeping everyone safe. The Planet Dolphin Catamaran Sailing Adventure reopen 6th of May.